I heard this story about Tom Waits' 1985 album Raindogs on CBC yesterday. Tom said something to the effect that every sound has to be hunted down, killed and skinned, and not made with the press of a synthesiser button. When a fellow musician suggested they just sample a particular sound, he said, No. I'd rather go hit my bedroom door with a 2X4, really hard. When giving direction to Keith Richards he was crawling around on all fours, saying "play it like this". to which Keith replied "I know exactly what you mean".

And so it is with furniture. Every part has to be hunted down, killed and skinned. It's a process every time. An enjoyable back and forth process, punctuated with educated guesses, and critical decision making while machines are roaring. Here's a few shots taken during the table build, as though everything went like clockwork. 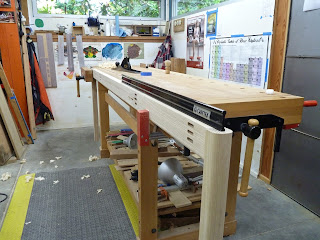 Flushing the aprons with the legs after glue-up. 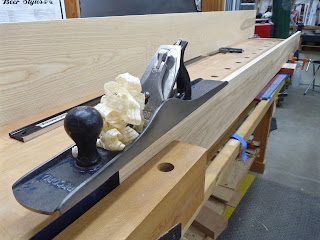 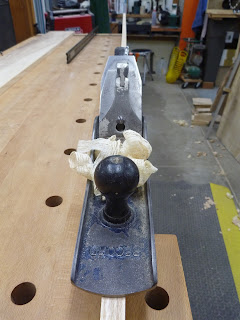 Get me Big Will. Will is most comfortable when he's on an edge joint. He just loves a good edge joint. These were a little rough coming off the jointer (I've been getting them damn close on the machine recently but these were a bit tricky for whatever reason). Big Will stepped in and within an hour had three joints just perfect. 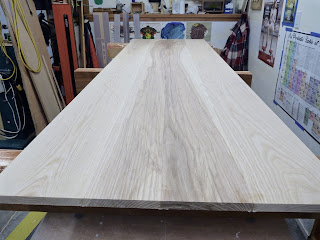 The rough table top after glue-up, straight out of the clamps, after glue clean up. 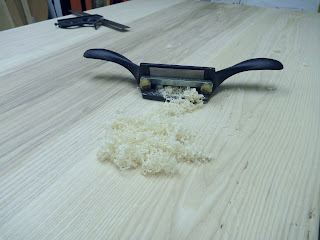 Removing a high spot along one seam. Haven't busted out the cabinet scraper in a while. 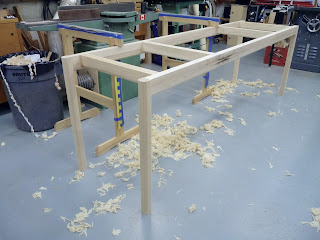 Some machine room hand planing. Flushing the rails with the aprons after final glue-up. 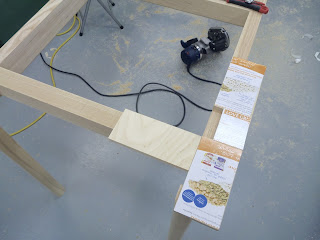 My sophisticated jig for routing table top clips mortises. generally double stick tape and some plywood does the trick. 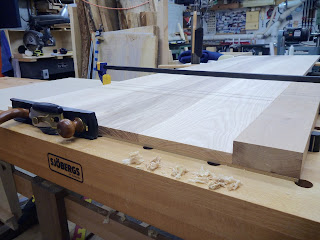 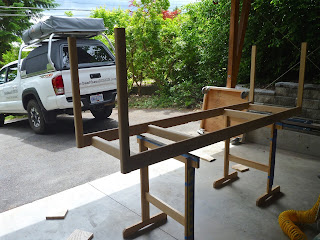 The soap finish. An outdoor affair. The most environmental finish known to man. Juxtaposed with a gas guzzling beast. Mankind has a lot of work ahead.
Posted by Ry at 11:49 AM

Email ThisBlogThis!Share to TwitterShare to FacebookShare to Pinterest
Labels: Table #5